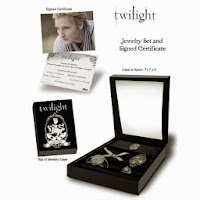 As my good friend *gypsy wings* would say... Laaaaaaaaaaaaaaaaaaa!!!
People have been dying to get their hands on Cullen Crest jewelry like the cast of Twilight are wearing in the movie. Welllllll, I was just randomly surfing last night... late last night... and I came across an exclusive set being offered by Amazon! It's not available until Nov 30th but OME... or should I say OMC!!! This set is on my Christmas list for sure! And I know I'm not the only one out there who WANTS this set (hint to hubby) so, I created the TwilightMOMS Amazon Widget to the left of this post in the red to give you links to the Cullen Crest Set as well as some other awesome items I found. The mens ring doesn't have anything to do with Twilight, but it had "Twilight" in the name and Edward just tied the knot with Bella... so I threw it in there! Heehee!
Posted by Lisa at 10:01 AM

What I'm Currently Reading To My Kids:

Bran Hambric and the Farfield Curse
by: Kaleb Nation

Promote your Page too

Promote your Page too